Josef Zisels: What is Happening Around the Babyn Yar Today?

Josef Zisels: What is Happening Around the Babyn Yar Today? 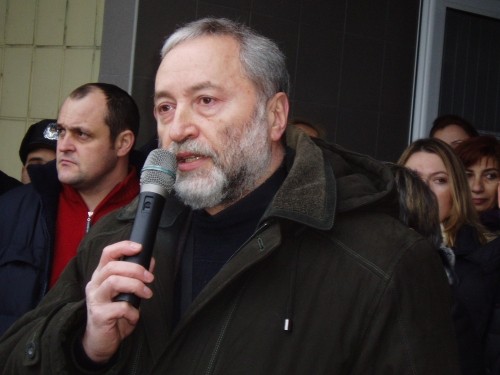 The memorialization of the Babyn Yar victims has branched off into three main projects.

Project 1 is state run, with the Ministry of Culture of Ukraine in charge. It envisages the creation of a memorial museum in honor of the Babyn Yar victims on the premises of the former office of the Jewish cemetery.

To implement this project, the state allocated 27 million UAH in 2017.  The main part of these moneys has been used so far, because the Ministry of Culture has not yet worked out the necessary conceptual, architectural, and design plans.

One of the reasons of this project’s slow development is that the Ministry is working indirectly through “The Babyn Yar” National Historical Memorial Preserve, which is, essentially, a municipal organization rather than academic organization, whose bureaucratic apparatus resists the implementation of Project 1.

Project 2 was initiated by “The Babyn Yar” Public Committee (Vitaly Nakhmanovich) and the Vaad of the Ukraine (Josef Zissels). It is being implemented by “The Ukrainian Jewish Encounter Group” (UJE) headed by James Temerty (Canada). This landscape-architectural project envisages the creation of a spacious memorial park (over 170 acres) which would include the Babyn Yar and all the adjoining cemeteries. Its preliminary name is The Babyn Yar – Dorogozhitsky Necropolis.  In 2016, a UJE-financed competition was held in order to select the best ideas for the park.

It would seem that it’s high time that the practical activities be started, but the implementation of this project is stalled because neither the city nor the state has given any evidence of interest in this project.  Mr. Temerty, who has been unsuccessfully trying to meet with President Poroshenko for over 1.5 years, can no longer invest in the project whose prospects are so uncertain.

And, finally, Project 3, the most controversial one, that envisages the creation of “The Babyn Yar” memorial and the Holocaust museum.

The idea of this project came from a group of major Russian businessmen of Jewish origin who were born in Ukraine, in particular, Mikhail Fridman, Gherman Khan, and Pavel Fuks. They propose to create a Memorial and a Holocaust museum on a grandiose scale.  But a whole string of questions comes up in connection with their project.

#1.   Project 3 envisions construction works on the territory of the Old Jewish cemetery. There is a document, signed by Rabbi Shlesinger of London, the person in charge of the main organization monitoring all the Jewish cemeteries in Europe, that contains a ban on any sort of construction on the site mentioned above. The initiators of the project ignore this fact.

#2.  They are also claiming that the Ukrainian Government supports their plan, which is not exactly so.

President Poroshenko, who came to attend the presentation of the project, said in his speech that he imagines the Holocaust memorial as a Ukrainian project, while he would be grateful to all those from abroad who wish to help. Although the initiators of Project 3 “haven’t noticed” this point, one can’t ignore a President’s opinion, nor that of the whole society in a present-day democratic Ukraine.

# 3. A considerable number of Ukrainian scholars have voiced their categorial rejection of the conceptual approaches of this project’s initiators, which they expressed in their “Open Letter of Ukrainian Historians”.

#4. Every museum or memorial concept has certain ideological implications. The narrative suggested by Mr. Fridman et al. creates a distorted picture of the Holocaust in Europe, placing the Babyn Yar and Ukraine in general (which was not even an independent country at the time) in the focus of that tragic phenomenon. Many participants of the relevant discussion pointed out this erroneous shift of accent in the project under consideration, but its initiators have failed to respond.

All the Holocaust museums in the world normally start with the history preceding this horrendous period. Such an approach is especially important for the understanding of the Holocaust in this country, which was a part of the Soviet Union at the time, whose Communist leaders had been involved in the shameful political dealings with the Nazi Germany. The project submitted totally overlooks the pre-war Soviet period with its implications for the specifics of the Holocaust in Ukraine.

#5. Our foreign friends and old companions are puzzled by our opposition to a “so fully outlined and powerfully advertised project”. But let these people think for a moment: Why would Russian oligarchs, who usually cannot take a step without Putin’s sanction, all of a sudden decide to invest in a 100 million non-lucrative Ukrainian project? We are convinced, and have sufficient reasons to do so, that this project serves some goals that are important for Russia in the armed war it is waging on Ukraine, as well as the information war against our country, with the Putin’s regime trying to sell to the world the warped image of Ukraine as a nationalistic and anti-Semitic country, where the human rights have been always violated.

Let me stress this again: the pro-Ukrainian part of the Jewish community, and the Vaad of Ukraine as its most active entity, are not at all against considering every possible variant of the Holocaust memorial and museum. But we want it to be a Ukrainian project contributing to a further integration of our young multinational country, rather than serving a Trojan horse for our Russian foes in their nefarious attempts to encroach on Ukraine ideologically.

It was mainly with this purpose in mind, to explain to our foreign allies, friends, and sympathizers the reasons of our resolute opposition to the Russian oligarchs’ project of the Holocaust museum and memorial, that I wrote this document.

Co-President of the Vaad of Ukraine.